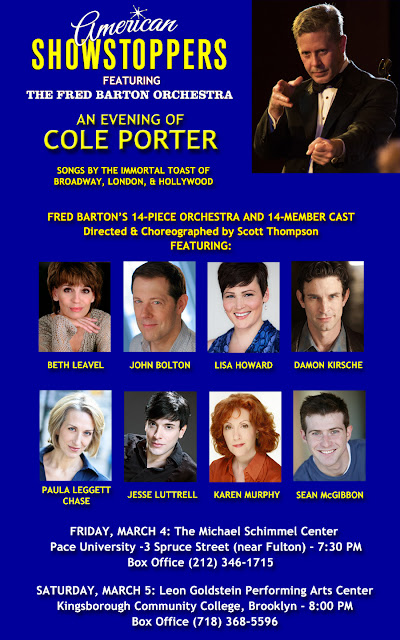 Following last season’s tremendous Evening with Irving Berlin and Evening with Johnny Mercer Fred Barton and his 14-piece Orchestra, headlined by a cast of Broadway’s best, will present a collection of Cole Porter’s most distinctive showstoppers. From Broadway to Hollywood, memorable numbers such as "I Get A Kick Out Of You," "Too Darn Hot," "I’ve Got You Under My Skin," "Night And Day," and "Let’s Do It" will be featured alongside hidden gems and numbers that haven’t been heard with Broadway-style orchestration since their debuts up to 90 years ago.

A TIME OUT Critic’s Pick!

This evening promises to be a song and dance extravaganza in celebration of one of the all-time greatest American songwriters!

“Mr. Barton raised the level of the evening from mere entertainment to great entertainment…this evening was a great success!” – TheaterPizzazz.com

Highlights from “American Showstoppers: An Evening with Irving Berlin"