UPDATE: We received a terrific review for our run of "9 to 5" the musical. Production photos by Christopher Clark/Music Theatre of Wichita "9 to 5":

I'm delighted to return to Music Theatre of Wichita as chauvinistic boss "Franklin Hart, Jr." in 9 to 5: The Musical!"

Dolly Parton penned the music and lyrics for this stage adaptation of the hit film comedy, which hilariously involves the wacky adventures of three working women who eventually achieve revenge on their chauvinistic boss. The title tune from the film (also written by Dolly) gets the show off to a lively start, and the new songs are a catchy and tuneful collection of musical fun. 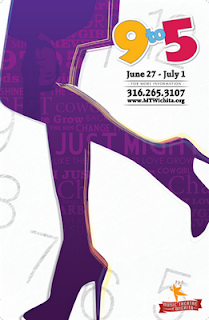