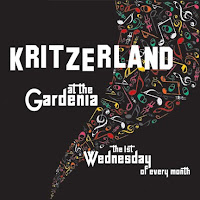 It’s a new year, and Kritzerland at The Gardenia is starting it off with songs culled from three different albums produced by Bruce Kimmel – Unsung Sondheim, Sondheim At The Movies, and The Stephen Sondheim Album.  While there are some Sondheim classics, you’ll also hear some rarely-performed-but-great Sondheim songs, many of which made their debut on these albums.  The cast includes some of the best voices in town, and one from out of town — special guest Millicent Martin, who was nominated for a Tony Award for Best Featured Actress in both Side by Side by Sondheim and King of Hearts, and appeared in the London production of Follies.

Last month’s shows sold out and there was standing room only!  Kritzerland at The Gardenia shows happen on the first Wednesday of every month (except for January), so mark your new calendar!