Damon Kirsche and John Boswell perform “Liza (All the Clouds’ll Roll Away)”
- music by George Gershwin, Lyrics by Ira Gershwin and Gus Kahn at Kritzerland’s 5th Anniversary
On Sunday, September 6, 2015 at 7:00 PM, Kritzerland at Sterling's Upstairs at The Federal presents their 5th anniversary show, “THE SONGS THAT GOT AWAY IV,” with musical director John Boswell. 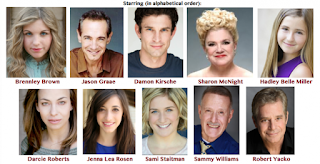 In September 2010 we began a monthly series of shows, the first year and three months of which were at The Gardenia. Michael Sterling then took us to Sterling’s Upstairs at Vitello’s, where we played only three shows, then we moved with him to his new venue, Sterling’s Upstairs at The Federal, where we’ve happily been ever since. Thankfully, the shows were popular right from the first, but who knew that sixty-one shows later we’d still be here for our fifth anniversary show, having never missed a month in all those years. We believe that makes us the longest consecutively running cabaret show of this type in LA history. Our anniversary shows are always wild, wooly and wacky and this one will be no exception. We have gathered an absolutely amazing cast for this show.


We call the show “The Songs That Got Away” because we usually do songs that we haven’t been able to fit in any other shows. But it’s morphed into much more than that. While we don’t like to reveal anything about the show, we can assure you it will be filled with the usual mix of the known and unknown, a couple of brand new things and some surprises – there will be beautiful ballads, funny stuff, and toe-tapping, tuneful up-tempos. Our anniversary shows normally sell out instantly, so don’t play the waiting game on this one, which is why we’re announcing reservations earlier than usual. The Kritzerland shows are produced and hosted by Bruce Kimmel and co-produced by Adryan Russ.