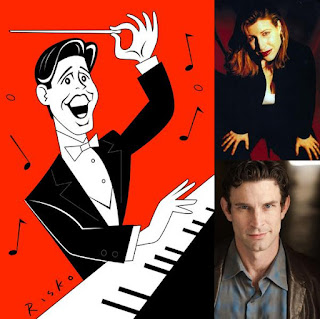 FRED BARTON PRESENTS—
AND THINKS YOU'RE GONNA LOVE IT!

Fred Barton hosts, sings and plays once a month with his 9-piece Broadway Band, bringing back classic Broadway show music with some swing on the side.  Fred's guest singers on January 15 are the incomparable ELENA BENNETT, and the dashing DAMON KIRSCHE in a rare New York appearance, with a special appearance by the legendary PAMELA MYERS.   Fred's previous guest singers KAREN WILDER and JESSE LUTTRELL will also appear.  Included will be songs from TENDERLOIN, LI'L ABNER, FADE OUT-FADE IN, SARATOGA, SUGAR, LIFE BEGINS AT 8:40, PLAIN AND FANCY, TWO ON THE AISLE, DO RE MI, SUPERMAN, HELLO DOLLY!, LITTLE ME, and a rare outtake from CHICAGO.

Fred: "Classic show music has fallen into a bit of disrepute and disuse around town. I just don't hear enough of it to suit me, in the piano bars, the cabarets, and of course on Broadway. My friends know I've been bitching about this for a few years. I love show music. I love a good band. I love a great singer. And I especially love a great singer singing a great show song with a great band."

"ELENA BENNETT has one of our time's uniquely powerful and rich voices, with a Broadway repertoire to match. DAMON KIRSCHE is the quintessential Broadway matinée idol with a voice for the ages and consummate taste. I can't wait to feature them with the Broadway Band."

"FRED BARTON PRESENTS – AND THINKS YOU'RE GONNA LOVE IT!" will be presented monthly throughout 2012, with a CD release in July.

The show's debut in September was a sell-out smash, with a line down the street, walkups turned away and a jam-packed room.

As Jerry Herman wrote: "There's just no tune as exciting as a show tune."

Fred Barton Presents – And Thinks You're Gonna Love It!