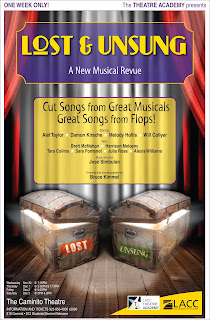 Based on the series of albums, Lost In Boston and Unsung Musicals, produced by Bruce Kimmel, the show features the songs you never heard from such classic musicals as Chicago, Sweet Charity, Company, Annie Get Your Gun, Gypsy and many others, along with unsung gems from such legendary flops as Smile, We Take The Town, Drat! The Cat!, Sherry!, and more.