Aug. 10: An Evening of Classic Broadway at Rockwell Table and Stage 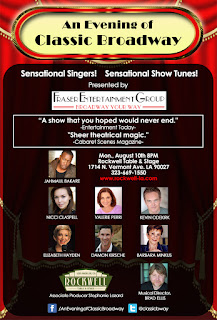 “When the perfect singer/perfect song/perfect rendition occurred, you wouldn’t want to be anywhere else on the planet. At the top spot was a mustachioed Damon Kirsche, who decided to go all debonair with Cole Porter’s rarely performed “The Tale of the Oyster.” This witty and chic 1929 sendup of high society is from Fifty Million Frenchmen, which also produced “You Do Something to Me.” Speaking of High Society, Kirsche later teamed with Ellis for “Well, Did You Evah!”—a scandalous regaling of gossipy upper-classers that was made popular by Bing and Frank in the 1956 movie, but was actually introduced by Betty Grable in the 1939 Porter musical DuBarry Was a Lady.
Funny and relaxed, the captivating Kirsche needs his own evening.”
- Tony Frankel, stageandcinema.com

“A show that you hoped would never end” - Entertainment Today