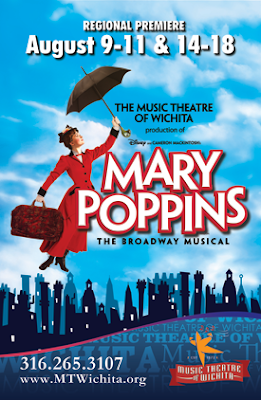 Next up: I play the irascible George Banks in the regional premiere of MARY POPPINS at Musical Theatre of Wichita. The Disney Company, in partnership with Cameron Mackintosh, has agreed to allow MTWichita to be one of the first theatres in the world to develop its own production of this all-family classic. The beloved songs from the film, including “Chim Chim Cheree,” “Supercalifragilisticexpialidocious,” “Feed the Birds,” and “A Spoonful of Sugar,” have been expanded and enhanced with new material from George Stiles and Anthony Drewe (the creators of HONK!).

A Musical based on the stories of  P.L. Travers and the Walt Disney Film
Original Music and Lyrics by Richard M. Sherman and Robert B. Sherman
Book by Julian Fellowes, New Songs and Additional Music and Lyrics by George Stiles and Anthony Drewe
Co-Created by Cameron Mackintosh,  Originally Produced by Cameron Mackintosh and Thomas Schumacher for Disney

UPDATE: The Wichita Eagle's Bob Curtright writes of the production:

"Music Theatre of Wichita’s ‘Mary Poppins’ brings out the kid in all of us":

"And this super—okay, okay, “Supercalifragilisticexpialidocius”—production that caps the 42nd season for Music Theatre of Wichita, cheers and enthralls the kid in all of us with its colorful, whimsical imagination...but it also touches our hearts in a satisfying way that the film often glossed over in favor of surface fun... Directed with exuberant flair but an underlying emotional sensitivity to the subtler themes by MTW’s Wayne Bryan, this show is a regional premiere and one of only eight productions this year licensed by Disney."


For a "Sneek Peek" of the cast, visit MTWichita.org.